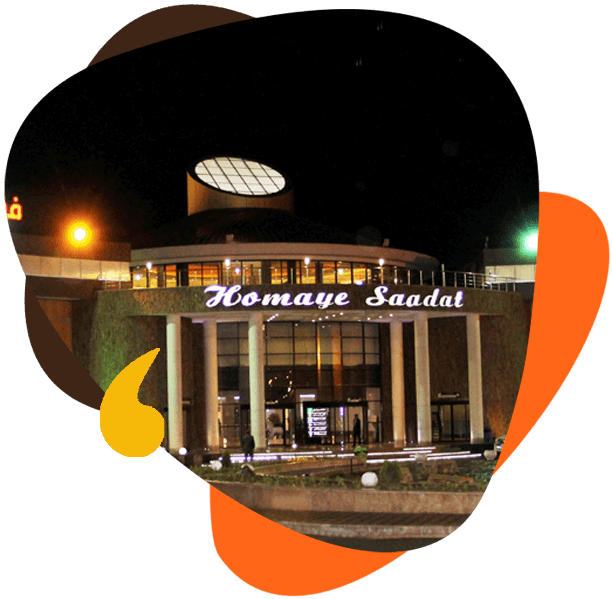 About eighty years ago two brothers called Sayed Abbas Jalali and Sayed Akbar Jalali were living in the heart of this little town called Deligan (Delijan) which at that time was a part of Tehran province. They by perseverance and tolerating years of pain and hardness could found a center called Saadat resturant in a place which was connected to Isfahan by only one dirt road. Plumbering water and electricity were unknown to all. They broght the water they needed from a stream by a donkey on which a vontainer was set. When the day grew dark, thay turned on the petromax lamps and continuously had to pump them to prevent them from turning off and help passengers to enter the hall in the light of the lamps. Latter when they bought a cart painted beautifully with two high wheels from (Ghom) Qom, carying water was easier. Those days all came to see the cart. So did people many years later when an oil refrigerator was brought from Tehran and put in the hall. They wondered how the fridge worked by oil and produced ice.

Self devotion, humanism, truthfulness and love to the homeland caused pepele from green paddies of the north to the roaring waves of the south sea, from Isfahan, Shiraz, Qom and Tehran and other adjacent cities they new this place by name of Saadat. Specially people of Isfahan and neighboring cities who near forget the name "Aa sayed Abbas".

The two brothers many years later when were in the best financial situation and could invest in Tehran and other important cities, never thought of doing that because they were only thinking about development and progree of their birtholace. For many years they did a labourious task to convince the City Council and other people of position in Isfahan and Tehran to provide water and electricity, solve the problems and cultural progress. Now after more than half a century Children of those two (their memory may live for ever) have taken lessons of perseverence and are following their fathers.

They seated the Homa (name of bird of endeavour and happiness) on the head of Saadat in order to help you dears who have not forgotten the nice memories of the past, to find your lost paradise in this lovely complex with an eycatching dream space named "Homaye Saadet" to liven the sweetness of the grand parents memories and position a sweet smile of satisfaction on your Beautiful lips in order not to let the chain of kindness and friendship between us be torn.